skip to main | skip to sidebar

Anne Chambers is guest on the Moncrieff Show

Anne is guest on the Moncrieff Show on NewsTalk 106 on Wednesday 7 September to discuss the subject of her most recent biography - Dr T.K. Whitaker - whose centenary occurs in December.
Posted by Anne Chambers at 8:14 PM No comments:

★ PRESS RELEASE ★
Ireland’s number one multicultural sporting event, involving teams from the world’s largest corporations, was launched today in Trinity in the presence of the Indian Ambassador Her Excellency Mrs R. Lal Lokesh.

The Ranji Tournament was founded by Anne Chambers, author of ‘Ranji: Maharaja of Connemara’ to commemorate Ranji’s association with Ireland and to honour his efforts during the early years of the Irish state to bridge racial boundaries and to promote Irish-Indian relations.

This year’s annual Ranji Cricket Tournament will be held in Phoenix Park, in the grounds of the Civil Service Cricket Club. Once again Ballynahinch Castle, the former Irish home of Ranji, will support the event.

Dennis Cousins of Cricket Ireland, Paul Rowe of Educate Together, Orla Purcell of the Ireland India Business Association, Ian Wilson of RTE, Gerry Kelly and Tony Connell of Civil Service CC and Arthur Deeny and Sanjeeb Bharik of RCCI were among the attendees at the launch.

Teams representing corporations such as the ESB, Google, Intel, Microsoft, Rabobank and Aamazon will take part this year. The competition will be held on Saturday May 7th, and promises to be an entertaining day out for fans and families alike.

A special competition for eager young cricketers to show their developing skills will be held during the interval. Entrance is free and open to all. 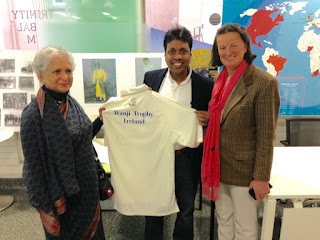 Posted by Anne Chambers at 8:17 PM No comments:

TK Whitaker
TK Whitaker is credited with pulling the Irish economy out of the doldrums in the 1950s.  He later became governor of the Central Bank and beat Michael Collins to be awarded the accolade of the Greatest Irishman of the 20th century.

As he prepares for his 99th birthday about a week from now and indeed, as the next governor of the Central Bank prepares to take up his post, we thought what better time to discuss this man whose life spans the history of the Irish state.   Myles is joined by TK Whitaker’s biographer, Anne Chambers.

Posted by Anne Chambers at 6:28 PM No comments: 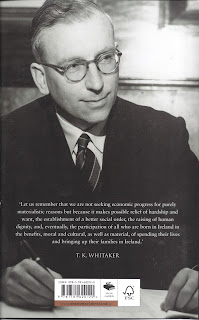 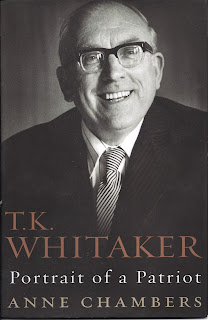 Posted by Anne Chambers at 8:27 PM No comments:

A “revolutionary” of the calibre of former civil servant and Central Bank governor Dr TK Whitaker is needed to ensure that financial markets take some responsibility for the effect their policies have on the lives of ordinary citizens and taxpayers, the MacGill summer school has heard.

Dr Whitaker’s biographer Anne Chambers noted he had, in the 1950s, undertaken to write the policy document Economic Development on a totally voluntary basis.

He and his team working outside office hours on their own time “without any notion or expectation of monetary or promotional recompense but simply because it was needed to be done”.
“In this age of entitlement, top-ups and bonuses, such civic-minded motivation seems, sadly, somehow anachronistic,” she said.

That “detailed, meticulous and practical” policy document had offered a “radical remedy” - the replacement of non-productive by productive capital expenditure, the introduction of free trade and an end to the isolation and protectionism of a previous era.

“It lowered the barriers Ireland had erected around itself and allowed the Irish people to look at their country, not from some mystic, historically idealised vantage point, but from eye level.
“But above all Economic Development offered hope and a way out of the economic quagmire in which Ireland and its people were fast bound. Economic Development and the First Programme for Economic Expansion, derived from it, led to a period of unparalleled growth and optimism.”
Ms Chambers said she still meets Dr Whitaker, now in his 98th year, once a week.

While he was the first to acknowledge the immense changes that have revolutionised the banking sector, including the globalisation of the industry and the impact of technology, it was difficult to imagine that under his stewardship “the warning light would not have been flashing in Dame Street long before the banking collapse occurred.

It was difficult to imagine that Dr Whitaker would have agreed to the “disastrous decision to separate the supervisory and regulatory functions from the Central Bank”.

Ms Chambers said that during the so-called Celtic Tiger “debacle”, while a diminution in the bank’s authority may well have been the result of European Central Bank intervention, the Irish Central Bank “retained sufficient authority nationally to curb the doubling of house prices, the tripling of credit to the building industry and the sanctioning of loans up to and beyond 100 per cent that occurred in the space of seven years”.

“And with Ken Whitaker on the board of the ECB, (Jean Claude) Trichet would undoubtedly have been faced with an able and determined opponent to his policy of light-touch regulation, leading, as it did, to the inadequate and incompetent supervision of the Irish banking system and to Ireland’s subsequent ‘humiliation’.”

Senator Feargal Quinn told the summer school it had been a joy to get to know Dr Whitaker.
He had changed the world in Ireland and had changed it with “enthusiasm, commitment and energy”, he said. 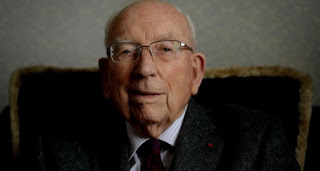 Posted by Anne Chambers at 8:05 PM No comments:

Anne is one of the speakers at this year's MacGill Summer School  held annually in Glenties, Donegal.

This year the School honours Dr TK Whitaker and Anne has been invited to give the lecture entitled  'Ken Whitaker - A Public Servant for all Seasons' in his honour on Tuesday 21 July at 11.am in the Highlands Hotel, Glenties. 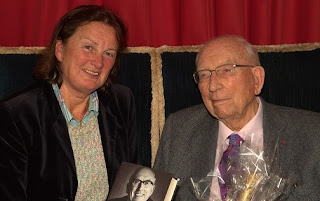 Posted by Anne Chambers at 9:24 PM No comments:

Admission is free and all are welcome. 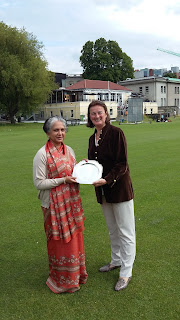 Posted by Anne Chambers at 9:21 PM No comments: